I opened my twitter feed this morning to so many tweets of well wishing and sending good luck for my trip to the ER. Well, it worked! It was one of the best trips to the ER I’ve ever had!

Last night I decided that this migraine was not going to resolve it’s self, and at that point my only option was to go to the ER (even though I HATE going there…) The waiting room was the fullest I’ve ever seen it, But the wait to be triaged wasn’t that bad.. I was triaged as a level 2 (One level up from critical/life threatening) instead of my regular 4 or 5(minor ailment), the reason for this was my heart rate and Blood pressure. My resting heart rate was around 135 and my blood pressure was also very elevated. The triage nurse was very concerned, but I assured her I was fine. The nurse offered me the family room which is quiet and dark! Life saver! They have big couches there so I was able to try and rest while I waited. I was lucky enough to only wait around 40 minutes , but once I was called I realized my nurse was my sisters best friend from high school! He also taught me music for about 4 years. Second life saver! After some small chit chat about life, I explained the the fun-ness of my life. I also explained that each time I come in, I get the same treatment because it works so well, IV fluids, Benadryl and 10 mg of Maxeran. He was so sweet, he let me choose the location of my IV even though I have pretty bad veins. We eventually settled on my hand, but for some reason my the IV was not properly working, but he refused to poke again and macgyver’d it a bit so the fluids would actually flow. The doctor I had was also a very compassionate person, she stated that they usually like to try other things first, but since I knew this had worked in the past, she would agree to treat with that combination. She also didn’t make me do the full neuro exam! Just the crucial parts, which I appreciated.  I was concerned that the maxeran wasn’t going to work this time as I didn’t classify it as a straight cut migraine, but it did enough for me to start to feel alive again, and of course, once you start feeling ok in the ER you want to get out of there!! 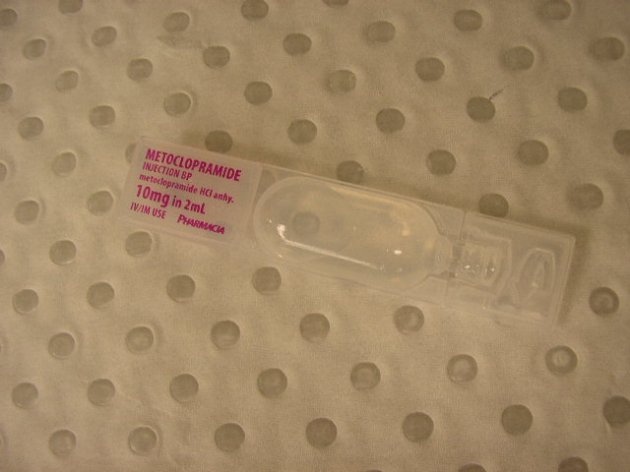 (I didn’t bring my phone with me to the ER last night, but here is a photo I grabbed from Wikipedia of the drug!)

I was only at the ER for about 4 hours last night, which was extremely lucky.Again, thank you everyone who sent tweets and messages wishing me well! They really did help!

Now I’m off to write a mid term! Even though the doctor told me to rest today, but who really listens to rest orders anyways 😉